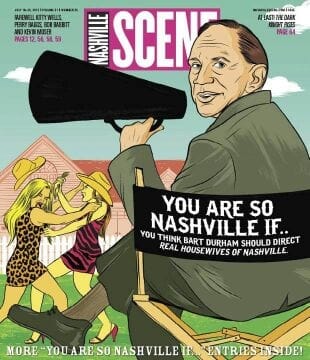 Here is more about the winner of this year’s contest from the July 19, 2012, edition of the Nashville Scene.

The winner of this year’s “You Are So Nashville If …” contest is no stranger either to deadlines or to the YASNIs themselves. Even before she started UT-Knoxville as journalism major, Holly Matthews was penning a weekly column about high school life for her hometown daily, the Morristown, Tenn., Citizen Tribune. “I love the vibe of Nashville,” says Matthews, a native Tennessean. “It’s so progressive, which is a great thing. There are all different types, and there’s lots of room for creativity, which is encouraged.” Speaking of encouraging creativity, Matthews says she’s entered YASNI at least two or three times over the years, but this time her entry – “You think Bart Durham should direct the Real Housewives of Nashville” – made it all the way to the top. Asked what gave her the inspiration for the entry, Matthews says it probably came from “years and years” of watching colorful Nashville attorney Durham’s novel serialized soap-opera TV ads. “It seems like he and the Real Housewives would get along well,” Matthews says

SubscribeTo Bart Durham News
You Deserve to be Paid for What You’ve Gone Through.