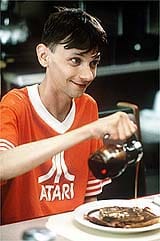 Paralegal Pam Wheeler mentioned to me in 1997 that she had a friend who was looking for a job. DJ was hired in 1997 to help answer the telephone and run errands, do filing, and other entry level chores. It was soon apparent that he had the smarts to take on more responsible work and after a few months he became a paralegal assistant and later a paralegal.

Meanwhile DJ was pursuing his love of acting. Nashville theatre was always in need of aspiring professionals to fill production roles in local plays performed before small audiences in small venues. DJ began getting mentioned in the Tennessean theatre reviews, then getting bigger parts, then getting good reviews in the bigger parts. The staff attended one of his plays at the Darkhorse Theatre on Charlotte Avenue to see him in a comedic role. We were proud and supportive of him.

I had a good relationship with DJ. I would walk by his office and had the same standing joke with him. “DJ, you look like you’re working hard….. But you never know, you’re an ACTOR.” If he was eating lunch or doing something that obviously was not connected with work, I would remark, “DJ looks like he’s not doing any work, but you never know, he’s an ACTOR.” (I think he got tired of this but he always smiled good-naturedly — maybe he just tolerated me because I was the boss.)

He landed his first movie role in 1999 in Moma Flora’s Family, a made for TV movie shot around Atlanta. DJ was gone for two weeks filming and that was his springboard to bigger roles. When the movie was shown as a TV movie of the week we lauded him with a luncheon and showed his part from the film clip recorded off TV.

DJ stayed on in the office until 1999. After Moma Flora’s Family he got more and more roles and was absent on location more and more. Eventually he landed his break out role in ROAD TRIP and left to work full time in acting.

ROAD TRIP is a teen age gross out movie similar to ANIMAL HOUSE or REVENGE OF THE NERDS. The movie did well financially. DJ stole the show with his characterization of the geeky college boy who is brought along on the trip only because he has a car. The picture above is from a diner scene in the movie. If you have seen ROAD TRIP you know what I am talking about. DJ’s diner scene is up there with Jack Nichlolson’s famous diner scene in FIVE EASY PIECES.

Going on his success in ROAD TRIP, DJ played the title role in THE NEW GUY, a funny film where he once again played a geek who is transformed into the coolest guy in the high school when he gets mistakenly thrown in jail and learns how to be hip from his cell mate. This movie was a success and something of a cult movie with young people also.

Major movie productions with DJ include The Core and Hustle and Flow, and Delta Farce. DJ has also appeared as a guest in many television series including Lost, Monk, Law & Order: Criminal Intent, Criminal Minds, CSI: Crime Scene Investigation, The Big Bang Theory and My Name is Early. DJ currently plays character Davey Sutton in the television series Memphis Blues. DJ paid his theatre dues and worked hard. Now it’s all paying off for a truly deserving guy.