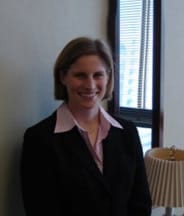 Lauren attended Vanderbilt University where she became the National Collegiate Cycling Association champion. After graduation in 2003, she raced professionally with the Ford-Basis Women’s Cycling Team.

Lauren’s father, Dr. Drew Gaffney, is a cardiologist and Professor of Medicine at Vanderbilt and was an astronaut aboard the 1991 space shuttle Columbia. Her mother, Sheila, is a physical therapist at Vanderbilt and her sister, Andrea, is an architect in Berkley, California.

Lauren joined our office in August, 2005, and quickly got a taste of what a lawyer’s job is like. She went to a mediation hearing where the case was settled for $810,000. She flew with the staff to Charleston, W.V., for a meeting with our client, Jimmy Tribble. Mr. Tribble has a wrongful death suit against a man who won $300 million in the biggest jackpot claimed by one person in history.

Lauren found she liked law and decided to go to law school. She began classes at the University of Tennessee Law School in Knoxville. After a year as a top student she transferred to Vanderbilt. She was elected to the Law Review and graduated in 2009.